Gallien Krueger make amps that are both well engineered and good sounding.

I recently had a GK 2001rb bass amp in for repair.

This is a complex machine (for a bass amp: see photo of innards); it has two 500W class G amps to provide do the heavy lifting in the low end (one each under the heat sink fan assembly in the photo below), and 2 x 50W integrated chip amps for the “tweeter”. (Can’t say I’ve ever seen the point of a tweeter in a bass rig, but there you go). 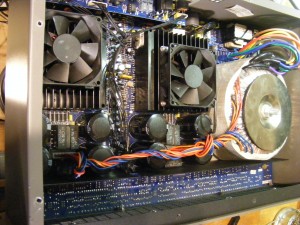 The 2001rb has a very sophisticated processor controlled protection circuit and the amp was going straight to fault mode.

Class G is an ingenious method of increasing amplifier efficiency, and hence reducing waste heat. To achieve this class G amps employ two (or more) pairs of power rails, in this case +/- 75 V and +/- 38 V. Power is only drawn from the higher power rails when the signal greater than 38V, and thus power is saved. A good discussion on class G amps can be found at Rod Elliot’s website.

After some inspection, it became clear that the LM337 regulator for the -15 V rail had gone short circuit. The LM337 was located under the heatsink for one of the 500W power amps.

Here’s the amp with the heatsink removed. The LM337 has been removed, and was at the top above the left side row of exposed transistors. 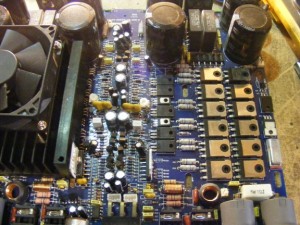 The consequence of the LM337 failing was that -38 volts was imposed on the circuitry down stream, including the pre-amp, and as a result there was substantial collateral damage. For example the TL072 op-amps in the pre-amp didn’t like it up ’em.

Most of these needed replacing, as did several of the DG419 CMOS switching ICs.

Often repairs like this are iterative; ie once you have repaired the main point of failure you then need to find what else has been damaged.

This entry was posted in Amp repair, Bass Amps, London. Bookmark the permalink. Both comments and trackbacks are currently closed.