I’ve had quite a few Ashdown bass amps in the workshop for repair.

Here’s the inside of a MAG300 I had in a recently. 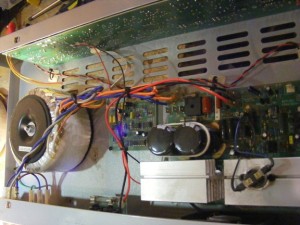 The amp was not powering up, and on inspection the mains fuse has blown.

On energizing the unit employing a current limiter (a 60W light bulb in series with the amp), it was obviously that something had shorted out in the amp.

The most likely candidates in a transistor amp are the output devices; however these were fine, as was the main bridge rectifier (which I’ve seen fail in these amps before), so the finger of suspicion now pointed at the mains transformer. 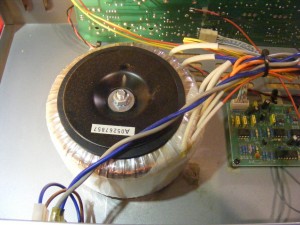 Interestingly the replacement mains transformer (on the right in the picture below) is larger than the one originally fitted, suggesting that the original may be on the marginal side for power rating (a larger transformer has a greater power rating). 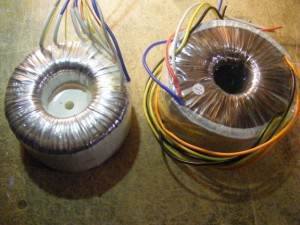 As expected fitting the new transformer fixed the amp.

This entry was posted in Amp repair, Bass Amps, JPF Amps. Bookmark the permalink. Both comments and trackbacks are currently closed.