Peavey have earned a reputation for making well-engineered amps at reasonable prices, so I was not expecting any major issues when I took in a ValveKing 100 for repair.

The symptoms where that the amp was not powering up: neither the indicator light, nor the valve heaters where illuminated.

However on opening the amp I was confronted with this: 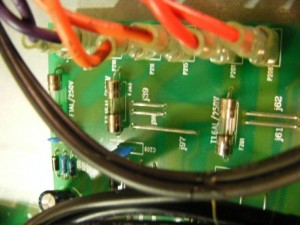 The fuses are the soldered onto the PCB, necessitating the PCB be removed for a simple fuse change!

However, in the VK100 the filament supply for  ALL the valves, including the power valves, in this amp is a single DC supply, and on further investigation I found that the diodes in one half of the bridge rectifier for said supply had gone short circuit. This would definitely cause the fuse to blow!

The most likely cause of the diodes failing is a power valve short to the heater, which is fairly common occurrence. Thus it is idiotic to run the power valves on a DC supply as a valve short is likely to cause considerable co-lateral damage.

Anyhow, I removed the PCB, and installed fuse holders for the 3 fuses to aid future repairs, replaced the diodes in the rectifier and reassembled the amp. 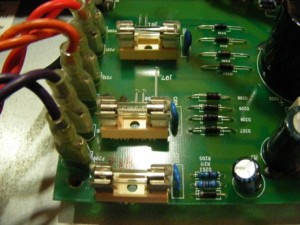 Before powering up the amp I tested the power valves. Oddly two look very worn whilst the other two looked fine. I could only account for this as the VK100 has “texture” control which varies the drive to each side of the push-pull output stage, so if this control is employed then one pair of valves are working harder than the other pair.

Regardless the worn pair of valves showed evidence of arcing when driven at full power in the amp, so I replaced them.

This entry was posted in Amp repair, Guitar Amps, JPF Amps. Bookmark the permalink. Both comments and trackbacks are currently closed.