I will be using our blog to show any cool and interesting valve amps we have in for repair service. This very early, rare Matamp GT-120 was brought in recently. It  had expired in the late 70s and hadn’t been turned on since!

Opening the chassis revealed the likely problem; the white powdery coating on the inside of one of the valves shows air has got into it. Although the glass envelope can be damaged by receiving a knock, valve envelopes are often cracked by overheating. The other valves also showed signs of overheating too. 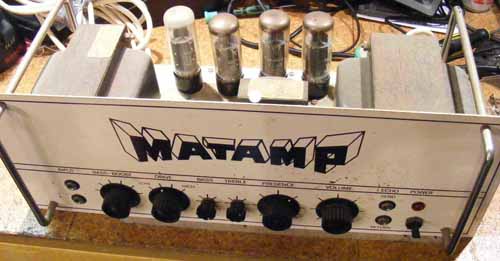 If an amp hasn’t been energized for several years there is a good chance that the electrolytic caps in the amp with have deteriorated to a point where they can’t be reformed, so it is always wise with an amp that has lain idle for a considerable time to bring the voltage up slowly with a variac and a series current limiter.

Having done this, most of the caps seemed to be in good order. However, I did change the caps in the bias supply (the blue 10 µF/160 V Erie caps shown in the photo of the board) as these were were leaking electrolyte. It is always worth changing the caps in the bias supply before they fail. If these caps leak too much current, or fail short circuit (a common mode of electrolytic cap failure), there will be insufficient negative bias voltage on the power valves to prevent excessive current draw. If you are lucky the HT fuse will blow (assuming there is one!); if you are unlucky the collateral damage can be very expensive. Think mains transformer. I’ve seen many amps where this has happened. 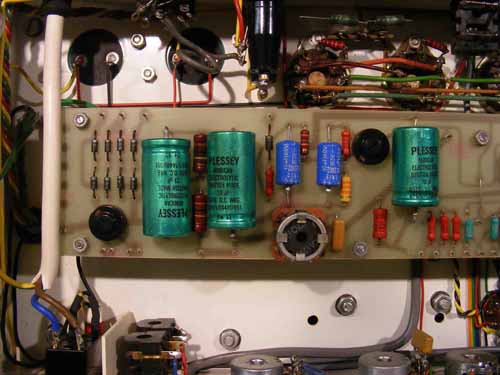 This entry was posted in Guitar Amps and tagged Amp repair, Matamp GT120. Bookmark the permalink. Both comments and trackbacks are currently closed.