I’m a massive fan of the Hammond organ: well who isn’t?

Anyhow I’ve recently been helping a friend of mine, and Hammond organist extraordinaire, Joe Glossop, get his Hammonds and Leslie cabinets into working order.

Joe recently acquired a couple of 60’s M series organs and a Leslie 145 cabinet (to go with his C3 and other Leslie 145!), however the method of connection of the Leslie cabinet to the M102 organ (that’s the white Hammond in the photo below) it came with was eccentric to say the least. Our aim was get the Leslie and M102 wired in the standard fashion so that all the Hammonds would work with either Leslie cabinet. 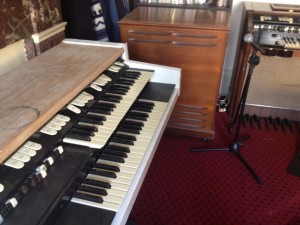 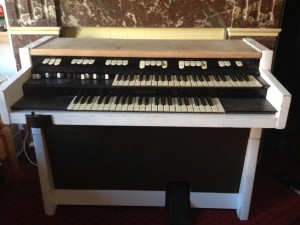 The white Hammond is a factory split M102, which it appears was made only for the UK market in the 60s.

Stevie Winwood had one of these; there is great Youtube footage of Stevie using an M102 from 1967 with the Spencer Davis group on Finnish TV.

It’s also the model occasionally played by Monty Python’s Terry Jones, so could also be useful for a Monty Python tribute act!

Part of the problem with the Leslie cabinet was that it had an amp from a 147 cabinet that ran on US voltage, so required a step down transformer; however the relay in the amp for switching between fast and slow speeds was a 120V relay, so could not be switched in the usual fashion from the organ, necessitating a non-standard wiring in the Leslie cabinet. 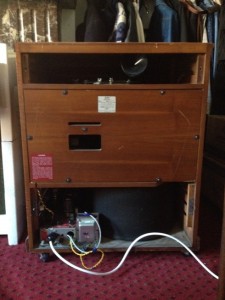 We replaced the relay with a 240V model and reverted the wiring to standard.

Ultimately though we will install a UK mains transformer to make the cabinet more roadworthy. Tube Amp Doctor in Germany sell a suitable replacement.

We also needed to rewire the Leslie connector from the M102, and reinstall a speaker for the reverb, which he got from another M100 (in Joe’s basement!!) that’s a more long term restoration project.

This entry was posted in Hammond organ, Leslie cabinet. Bookmark the permalink. Both comments and trackbacks are currently closed.