I’ve had a few Hughes & Kettner TubeMeister 18 amps in for repair.

This is an 18W fixed bias amp that uses 2 x EL84s in the output stage. These amps have a quite sophisticated biasing system that automatically adjusts the output valve grid voltage for optimum bias, and also shuts the amp down in the event of valve failure to prevent further damage. They also have a nice plexi panel backlit with blue LEDs.

Output valve operational status is indicated by 2 LEDs on the back panel (one for each valve), and this amp came in with one LED flashing which should have meant that the corresponding valve had failed.

When I’ve had these amps in with this fault before it’s simply been a case of replacing the output valves and the amp is up and running, however in this case changing the valves had no effect on the fault; the flashing LED still indicated that the valve was faulty.

Looking at the schematic for this amp, the power valves are turned on and off by MOSFETs in the cathode circuit. After much head scratching and probing I found that one of the MOSFETs had a short from gate to source, and this was causing the fault condition: ie the valve protection circuit had failed!

Here’s the PCB with the offending MOSFET removed: 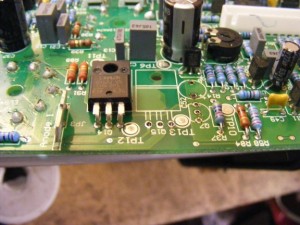 I replaced the MOSFET and this  cured the problem.

This entry was posted in Amp repair, Guitar Amps, London. Bookmark the permalink. Both comments and trackbacks are currently closed.