Here’s some photos from an emergency repair I did for the band Swans.

I got phone call from their tech saying that one of their amps. a MESA Carbine M9, had died with smoke emanating from the innards.

Swans needed the amp turned around quickly as they were on tour. I said that this didn’t look promising but I would have a look at it; smoke is usually a bad sign, and if say the output transistors had died it’s unlikely that I would have the correct parts in to affect a repair.

Anyhow, when I got the amp the source of smoke was fairly obvious: 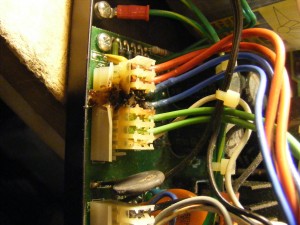 Anyhow, the I removed the connector and soldered the wires directly to the PCB and we were up and running again. 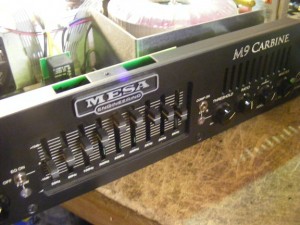 This entry was posted in Amp repair, Bass Amps, Guitar Amps, London. Bookmark the permalink. Both comments and trackbacks are currently closed.