It’s not often you see one of these.

No-one I know had one seen before.

It is of course the Wem Deep Blue.

Looks fairly conventional from the front. 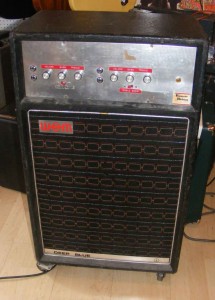 But what’s that in the back. A Copicat tape echo! 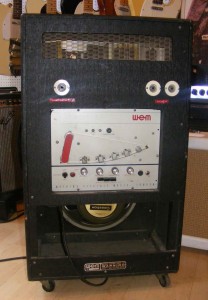 We’ve only found one other picture of a Wem Deep Blue in the internet in an article about Copicats.

It seems to be a descendant of the Watkins Joker, which was also an amp with integral tape echo (and indeed microphone stand).

The amp was  30W 4xEL84 similar to an ER30, and the Copicat was the first PCB valve version. The amp has 4 inputs including one labelled “clarinet”, so perhaps this was aimed at the trad jazz band?

All the valves are Mullards, and the loudspeaker is a Thames Ditton, Celestion G12H.

The amp was a bit of a pain to disassemble to say the least, and someone had rewired the mains in an “interesting” fashion.

However, it was well worth the effort to resurrect the amp as it now sounds fabulous.